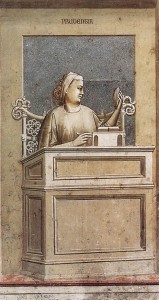 Giotto personifies the first of the ‘Cardinal’ Virtues as a student gazing into a mirror. This is to illustrate that the virtue of Prudence helps us have a clear and uncluttered view of the prospects that lie in store, based upon how things really are, rather than how we wish they were.

Newman described Prudence as the virtue which ‘discerns the end in every beginning, the origin in every end, and knowing how the path lies from one to the other’.